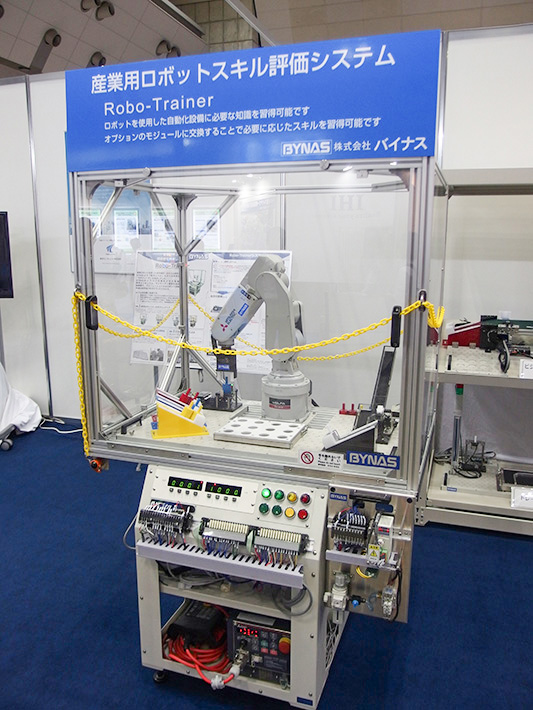 In the manufacturing industry, attention to industrial robots increases year by year.

But there is concern that the shortage of human resources who can master robots will become a bottleneck in the spread of robots.

The number of system integrators is not overwhelmingly enough.

It is urgent to train people who can use robots.

In response to this problem, services and products that support the development of “robot human resources” capable of using robots have appeared in succession.

Mitsuiwa, which sells automated systems and other solution products, will launch a “Robo-Trainer rental service” in July 2018 in collaboration with SI-company Bynas and Leasing-company Tokyo Century.

The exhibition was held in Tokyo at the end of May, and appealed to visitors.

A set of robots mounted on a pedestal and workpieces for training and work storage areas can be used for a monthly fee of 241,000 yen.

Although Mitsuiwa has been selling this product, it received comments from customers saying “I want the set only a training period” and made it available for rental use.

A test function is also provided to confirm whether or not the necessary technology and knowledge have been acquired.

Additional costs will occur, but visit training by Bynas technicians are also possible.

“Currently, there are many companies and schools considering introducing robots , but I hope that companies that want to engage in SI business will also use the robots,” says Masahiro Funakawa, manager of the smart factory promotion department.