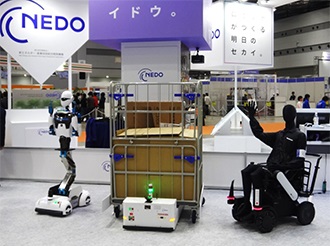 NEDO and Toshiba announced on March 30, 2020 that they have established specifications for the Autonomous Mobile Robot Interface (AMR-IF), an interface for connecting an autonomous mobile robot to an operation management system. The two companies have started providing AMR-IF compliant operation terminal software samples.

The multiple mobile robots of different manufacturers and types can be operated by a common system by using this software. It can be expected that the cost reduction and the use of robots and in areas where robots are not used can be expected. The two companies will aim for international standardization so that AMR-IF will become the standard interface for mobile robots.