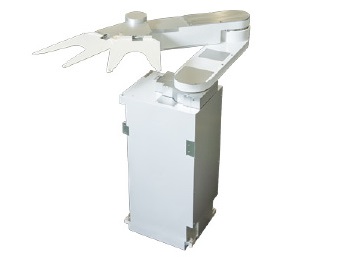 The new robot adopts direct drive system that directly drives the robot arm using its original AC servo motor “Σ-7 series” instead of mounting a reducer on the robot arm. The positioning accuracy is doubled, and vibration is 1/6 comparing with the conventional one. “SEMISTAR-GEKKO MD124D” can be applied to transfer 300 mm semiconductor wafers. It contributes to accurate transportation and improves productivity.

At the same time, Yaskawa Electric have also developed a compact and lightweight standard controller for clean robots, “SR200”. The volume of the robot has been reduced by 42% and the weight has been reduced by 35% compared to the conventional one, while ideal for major standard such as SEMI standards by adopting an original machine controller (MP) of electric component.