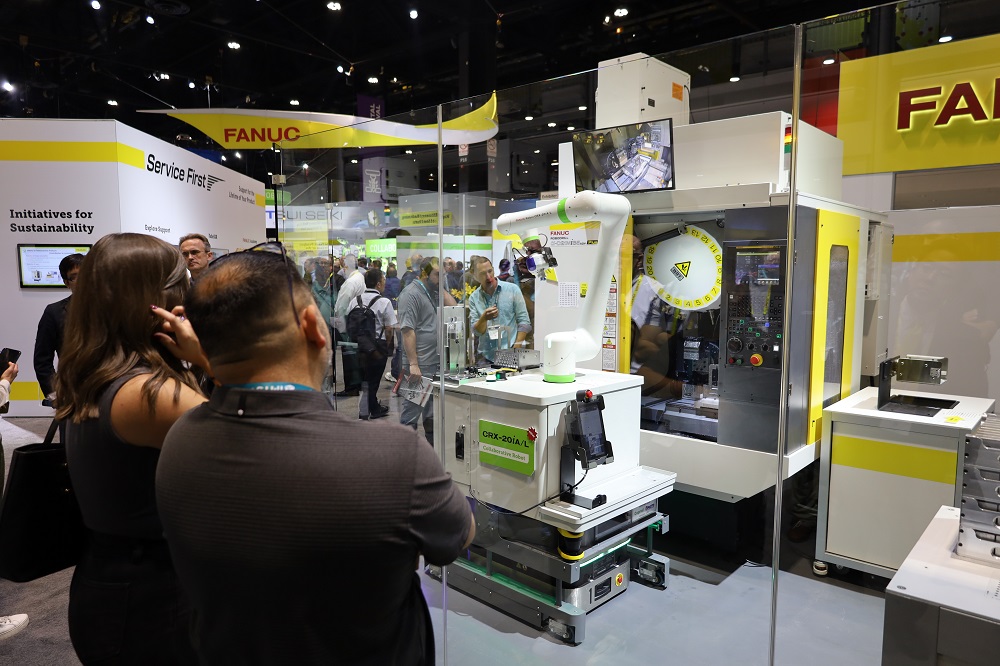 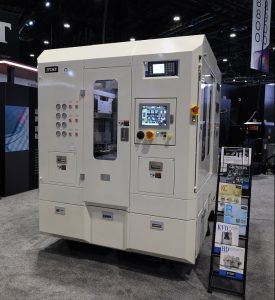 There were also exhibits targeting fields such as semiconductors and medical care, which are expected to be in steady demand in the U.S. market.

JTEKT exhibited its latest horizontal MC “FH5000S-i” for the automobile, semiconductor, and other industries. The company also displayed “DXSG320,” a wafer double-sided grinding machine manufactured by JTEKT Machine Systems, a JTEKT Group company, to appeal to the semiconductor manufacturing sector, where demand has been high for the past several years. Mitsuhiro Isomura, general manager of Overseas Sales Dept., said, “The U.S. market has high expectations for the EV, aerospace, and semiconductor manufacturing equipment sectors in the future”.

There were also some manufacturers offering unique lineups to meet the demands of the U.S. market. 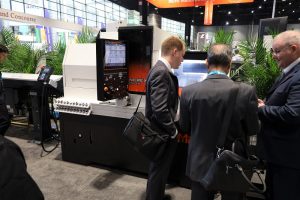 The highlight of Mazak‘s exhibit was products made at its Kentucky plant in the U.S. Its swiss-type automatic lathe “SYNCREX series” was designed in the U.S. for the U.S. market, where demand for small parts such as medical devices and connectors is high. The bed material is made of mineral cast, which has high vibration damping properties. It reduces tool vibration and contributes to longer tool life. Shinji Yamazaki, managing director of the company, said, “We launched three models at the same time to increase competitiveness”.

Okamoto Machine Tool Works exhibited its brand-new “PSG-1224CANC,” a surface grinder, for the first time. The director and senior engineering manager of the U.S. subsidiary explained, “Since most customers in the U.S. are very demanding about delivery time, we decided to offer a machine that can be shipped immediately. It is an entry-level model, but still provides higher accuracy to meet the needs of customers.”

TAKAMAZ Machinery exhibited a loader-equipped version of its “J-WAVE PLUS” gang type CNC lathe. The vice president of the U.S. subsidiary said, “We prepared the loader specifically for the U.S. market. It is suitable for special bolts used in aircraft”.

Murata Machinery exhibited its “MWR120” CNC turning center for the first time at an exhibition in the U.S. The new machine is capable of processing workpieces with complex shapes, by adding Y-axis and milling functions to the conventional machine.

Toshiyuki Komori, president and CEO of the U.S. subsidiary, recalls, “The addition of those functions was intended to meet demand in Europe, but the reaction in the U.S. has been unexpectedly positive”. 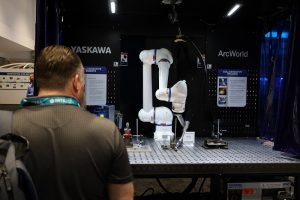 In the robotics area, YASKAWA Electric presented “Arc World HC,” a welding cooperative robot package for U.S. job shops. The company emphasizes reducing risks by, for example, slowing down the processing speed when a protective curtain does not surround the robot. Takuya Kikuchi, director of the global sales team of the U.S. subsidiary, said, “Job shops often request to buy products and use them right away, so we propose our products in packages and not as single items”.

In the tooling area, NACHI exhibited “AQUA V MILL Series” end mills for the U.S. market. It differs in size from the “AQUA REVO MILL” end mills offered in Japan. The deputy general manager of the U.S. subsidiary’s tooling division commented, “The end mill market in the U.S. is very competitive. Since importing the same end mills developed in Japan would not meet the demand of U.S. customers, we developed our own end mills in sizes widely demanded in the U.S.”.