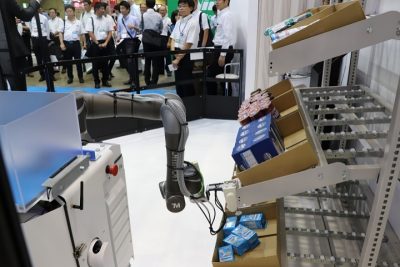 More than 450 companies and organizations participated in the exhibition.
74,520 people gathered at Logis-Tech Tokyo 2018, which exceeded the previous exhibition of 2016 by 10,000 people.
Background of workers shortage, proposals for automation of work and efficiency improvement were in the spotlight. Especially exhibitions using industrial robots attracted attention.

Even deformed or damaged boxes can be lifted 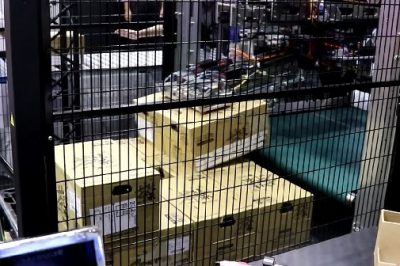 Toshiba Infrastructure Systems & Solutions Corporation exhibited a gate-type robot to prevent corrugated cardboard boxes from being damaged.  This is for what is called depalletization, a work that unloads a stack of packages.  Cardboard boxes have low durability on the top and bottom surfaces that are taped.  The upper surface of a general logistics robot is sucked by a suction cup when the corrugated cardboard is lifted, but the robot of the company sucks not only the upper surface but also the side surface and distributes the load by lifting the cardboard from an obliquely upper side.  It also supports from the bottom with a conveyor mounted on the gate-shaped part, so it reduces the time it is absorbed and in the air.  Hideto Yui, Head of Business Unit Robotics, Image processing and security systems, Security& Automation System Division said “This approach would allow depalletization of boxes that are somewhat deformed or damaged.”

Combining an Automatic Guided Device and a Collaborative Robo

Omron proposed a combination of a Taiwanese manufacturer, Techman Robot’s robot and its company’s automatic vehicle=AGV, which was partnered in May 2018.
It is assumed that the product on the shelf is automatically picked in a physical distribution warehouse.
It has been often done by human hand.
“Techman’s robots are collaborative and can work in the same space as people. Even if it is difficult to fully automate them, the robot’s ability to pick up the best-selling products alone will reduce people’s labor by many percent,” said Mr. Masahiro Ohara, Assistant Manager of Industry Marketing Department.