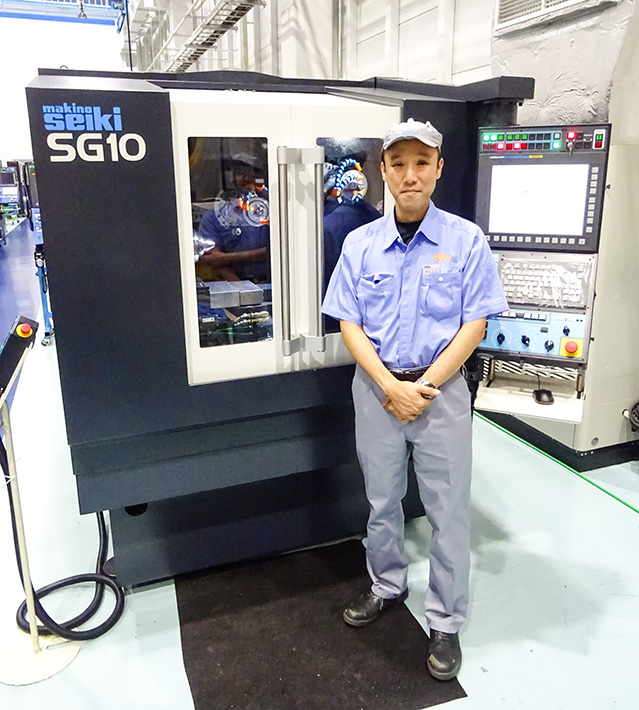 Developed new products “SG10”
Makino Seiki, a tool grinder manufacturer, has developed SG10 which is going to be unveiled at the 29th Japan-International machine tool Exhibition (JIMTOF2018).
The completion of the reconfiguration of the head office factory scheduled for spring 2018 will be regarded as its “reborn.” Makino Seiki will plunges the market with aggressive product development and improvement of production capacity.

Restructuring of the plant is completed
The first plant was completed in March 2016 and the second in September 2005.  The third plant, which mainly functions as a warehouse, will be completed in March 2018. The new headquarters and factories have been rebuilt for several years, and production capacity is expected to be increased 1.5 times.
President Shimizu stated that “I would like to make it our “reborn” with the completion of the factory refurbishment.

Ten years have passed since Shimizu assumed the office of President. “I am listening to the customer’s voice more than anyone”, President Shimizu said. He has been actively involved in determining the direction and concept of products, and have always been leading the development of new products.

In recent years, the company has been focusing on expanding the range of products, and has also developed a vertical cylindrical grinder “TAD” for roughing process, which roughly forms rod-shaped materials into tools, and a tool measuring device “procam.”  “It is our strength to be able to make a total proposal from step roughing, finishing and measurement,” he emphasizes.

Including the current main model AGE 30, “SS 7” specialized in small diameter was added to line up.
He also showed confident and PR again the following products at JIMTOF 2018 “Neoflat adapter” and “D2 collet” developed by Makino Seiki which excel in runout accuracy and repetition accuracy when chucking the workpiece.