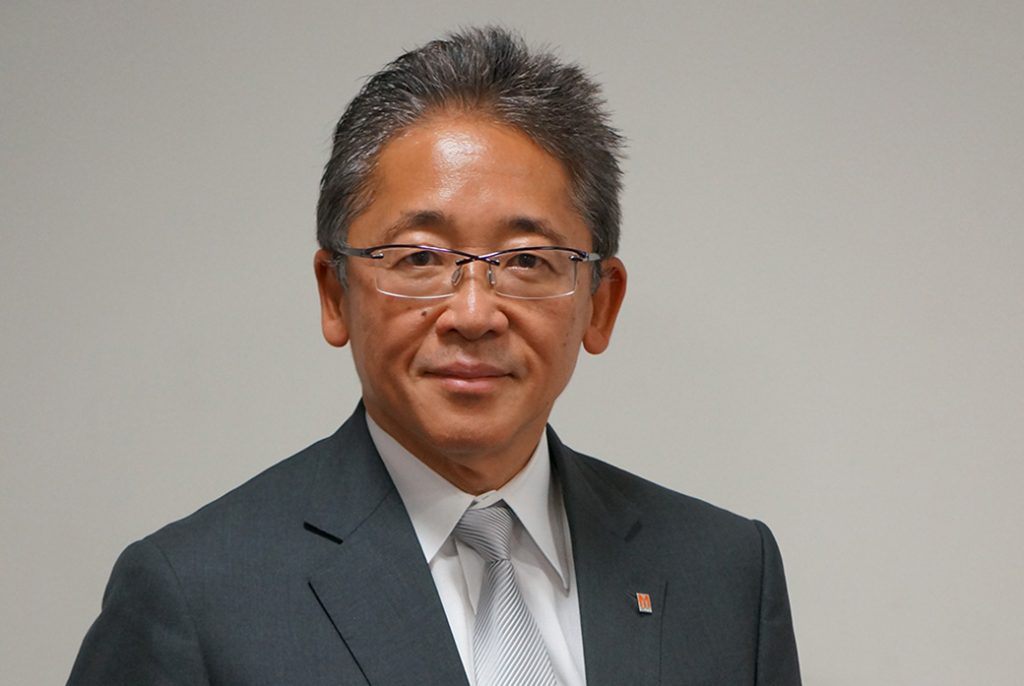 Yamazaki Mazak has a new president for the first time in 18 years. Its new president, Mr. Takashi Yamazaki, has been mainly engaged in sales and marketing and has extensive international experience. He says, “I would like to continue to visit machining sites around the world. It is important not only to read reports from our sales team but also to visit and see firsthand the sites where our machines are actually used.”

– You assumed the presidency in the midst of an unstable market.

It is important to monitor the orders we receive every month; however, I often watch the trend over 3 months and roughly judge whether orders are ceasing to fall, orders may continue to fall, orders are recovering, and so on. The orders received in the period from April to June amounted to 80% of those over the same period in the previous year, which matched the trend for the industry as a whole. Orders have continued to fall slowly, without any sense of atmosphere of a sudden drop. Considering the rebound from the overly high level in 2018, I think it is not such a gloomy situation. Taking advantage of the world’s largest machine tool exhibition, EMO Hannover, to be held in September, I would like to especially assess the business outlook in Europe while I am there.

– You have a manufacturing base in the UK.

Nobody can predict how issues related to the UK’s exit from the European Union, called “Brexit,” will go and affect in the future. People in the UK seem to think that the future remains uncertain. It is this kind of situation, but our company has been producing there for over 30 years and has sufficient human resources. We have been preparing for this through a variety of simulations by assuming every possible situation. I think that tariffs will not be high and that the impacts will be limited, even if a no-deal Brexit becomes a reality; so, we will continue production in the UK.

– In Asia, it is also hard to predict trends.

China was not so bad during the CIMT Show in Beijing this past April, but there has been no growth since May. One of the causes is probably the setbacks they have faced in their trade negotiations with the US. I expect that the current situation will continue for a while. On the other hand, we have expectations to Indian market. We have a Technology Center in Pune, India, which was established in 1998 when I was in charge of our Singapore operations, and there is a test cut machine permanently installed there. It has been extremely useful, because mass production of automobile parts is very active in India, and there is strong demand for test cutting, including jig and fixture designs.

– Based on such situations in various countries, what business strategy will you adopt as the new president?

Historically, the machine tool market has been full of ups and downs. For that reason, shortening the production lead time is important for management. The production lead time needs to be shortened to quickly follow the ups and downs of the market. Against such a background, we are working to upgrade our factories to “MAZAK iSMART Factory”. These are factories that produce highly efficiently, using Internet of Things (IoT) and automation technology. While we are developing this technologies at every production base, analyses and improvements using big data and improvements in productivity are having big effects. In addition, in conjunction with my appointment as president, we are identifying things that should be changed and should not be changed within the company. We plan to develop new growth strategies by clarifying challenges to overcome and then enhance them through companywide discussion.