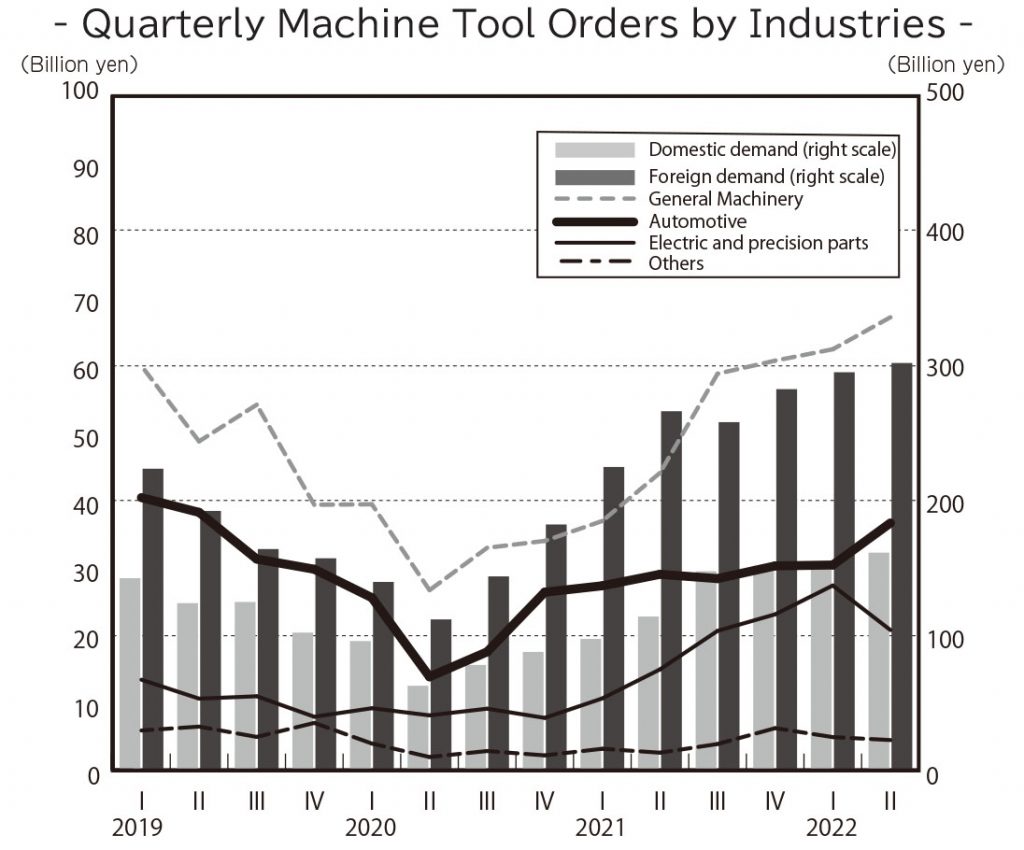 The supply-demand results for machine tools and forming machinery for the first half of 2022 (January-June) have been settled. According to the Japan Machine Tool Builders’ Association (JMTBA), the total amount of orders for machine tools in the first half of 2022 was 911,222 million yen, up 29.8% from the same period last year, and the production amount was 527,161 million yen, up 19.0%. While the current business conditions are favorable, there are also concerns about risks such as semiconductor and component shortages, geopolitical risks, as well as the depreciation of the yen. 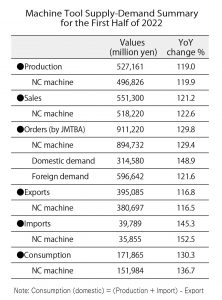 The global economy in the first half of 2022 showed more economic activity than in the previous year, though it has not fully recovered from the effects of the COVID-19 pandemic. Economic growth in China was quiet, but capital investment activities were robust in the U.S. and Europe.

The Japanese economy also moved out of its economic stagnation thanks to the progress of COVID-19 vaccination. As the economy recovered, corporate demand for capital investment also picked up. According to the forecast survey published by the Cabinet Office and the Ministry of Finance in Japan, capital investment in FY2022 will increase 16.2% over the previous year. Among manufacturing industries, the “automotive and related accessory manufacturing industry,” which includes a large volume of users of machine tools and forming machines, is expected to show a sharp increase of 31.9% year-on-year (YoY).

Due to the increased economic activity, the supply-demand results for machine tools in the first half of 2022 are stronger than in the previous year. According to JMTBA, production and total orders, sales, exports, imports, and domestic consumption each exceeded those of the previous year.

The total amount of machine tool orders in the first half of 2022 increased 29.8% YoY to 911.22 billion yen, marking the second consecutive year of YoY growth.

On a single month basis, all months in the first half of 2022 exceeded the 100 billion yen mark, which is considered a good indicator of strong performance. After breaking the 160 billion yen mark in February, order levels remained strong at more than 150 billion yen until June.

Domestic demand increased 48.9% YoY to 314.58 billion yen. A complete change from 2021, when the recovery was moderate compared to foreign demand, domestic demand in 2022 showed a growth rate higher than that of foreign demand. Following the previous year, domestic demand in the first half of the year exceeded 200 billion yen, and among the 11 major industries of demand destinations, 10 industries excluding “Public Sector and Institutions” recorded YoY growth. Orders from the general machinery industry, a major user of machine tools, increased 59.8% YoY, and orders from the automotive industry also rose 18.9% YoY. Orders from the aviation industry, which had been stagnant in the previous year, showed signs of recovery, rising 36.2% YoY to 2.396 billion yen.

Foreign demand increased 21.6% to 596.642 billion yen, crossing the 500 billion yen mark following the second half of 2021. Demand from Asia increased slightly, while demand from North America and Europe showed significant growth from the same period of the previous year. The recovery trend in China, which was the first to recover from the COVID-19 disaster, has slowed down, resulting in only a moderate recovery in Asia, up 5.3% YoY to 289.56 billion yen. North America made a significant recovery from the previous year, rising 49.3% YoY to 178,807 million yen, exceeding 150 billion yen for the first time in the last seven half-year periods. Europe increased 34.1% YoY to 116.884 billion yen, exceeding the 100 billion yen mark for the second consecutive half year, driven by growth in Germany, Italy, France, and the UK. In particular, orders to France grew significantly, rising 81.4% YoY to 12.986 billion yen. 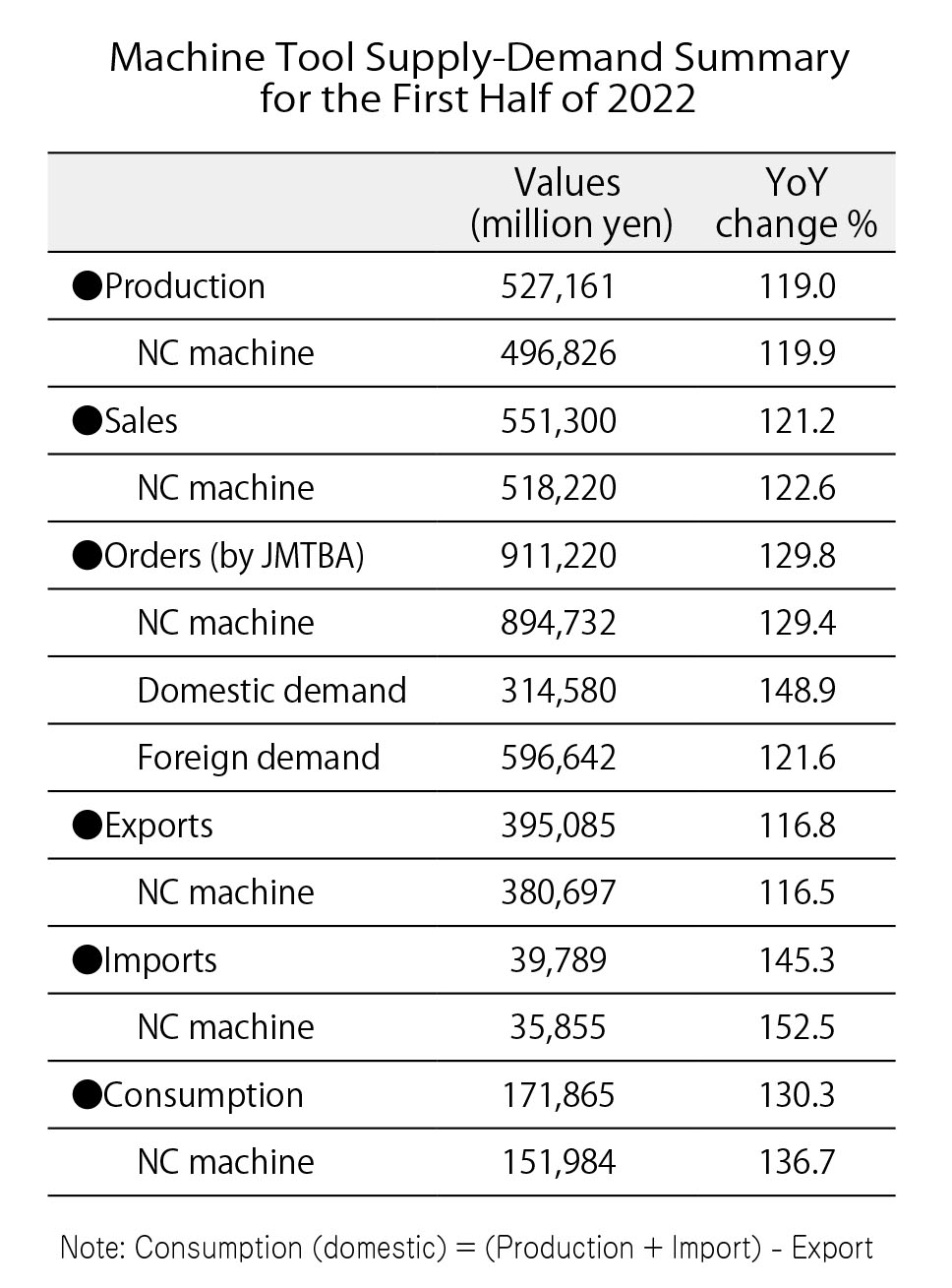 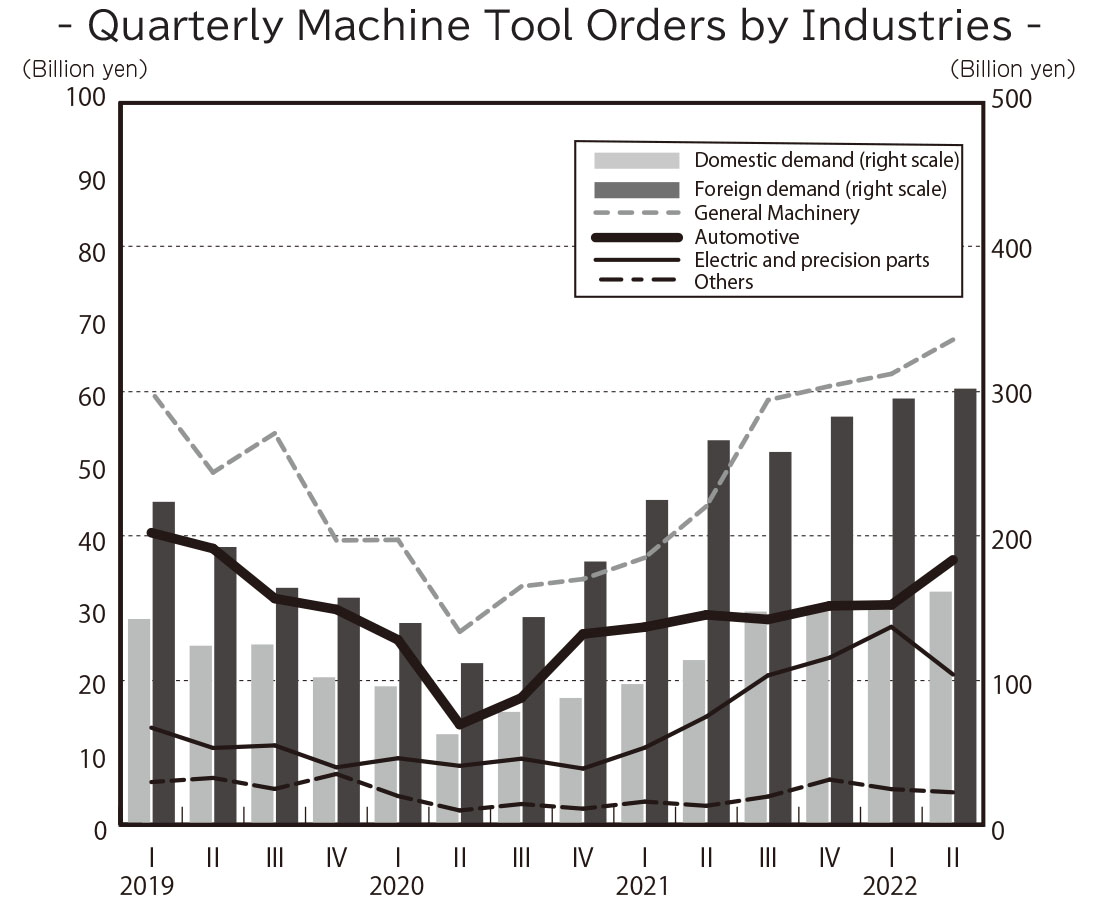