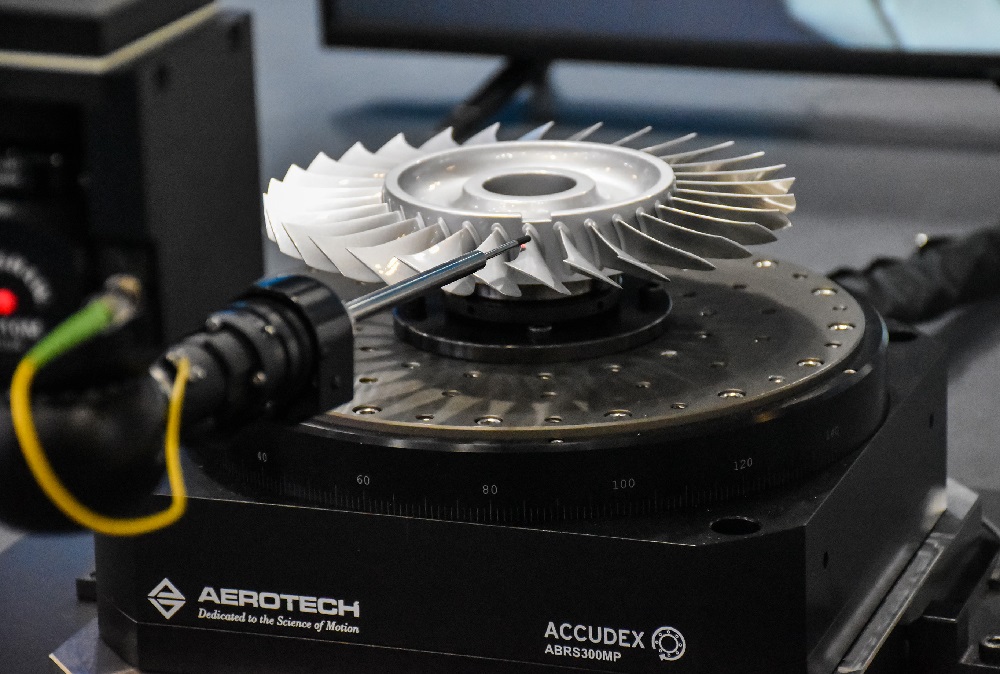 Many exhibitors showed their creativity in the way they presented their new products, but also introduced the concepts and the demo lines for production.

Toyo Advanced Technologies demonstrated a production line that uses a robot to connect “TVG-20C-2S” a vertical compound grinder for machining I.D. and end faces, and “TGG-26-2W” a gear grinder for machining tooth surfaces. “This system is unique to our company, which offers a lineup of both multitasking and gear grinding machines,” explained the person in charge of the project. 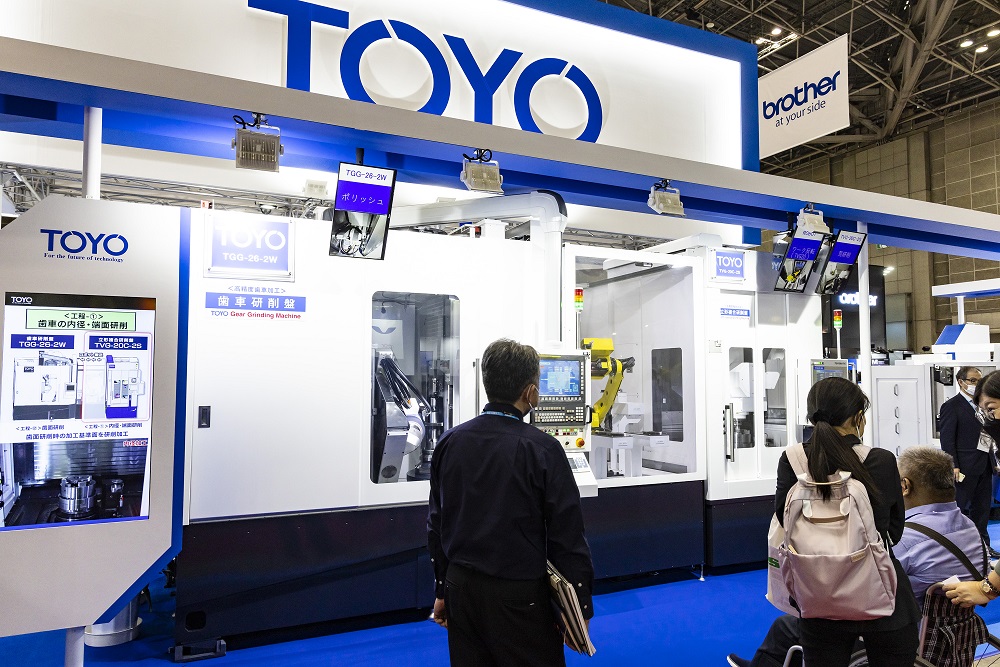 Makino‘s new high accuracy wire EDM “UPX600” caught the attention of many visitors with its design that uses many curves. According to the person in charge of the machine, “The most remarkable feature of UPX600 is that it can achieve the same surface accuracy with water processing fluid as with oil processing fluid”. 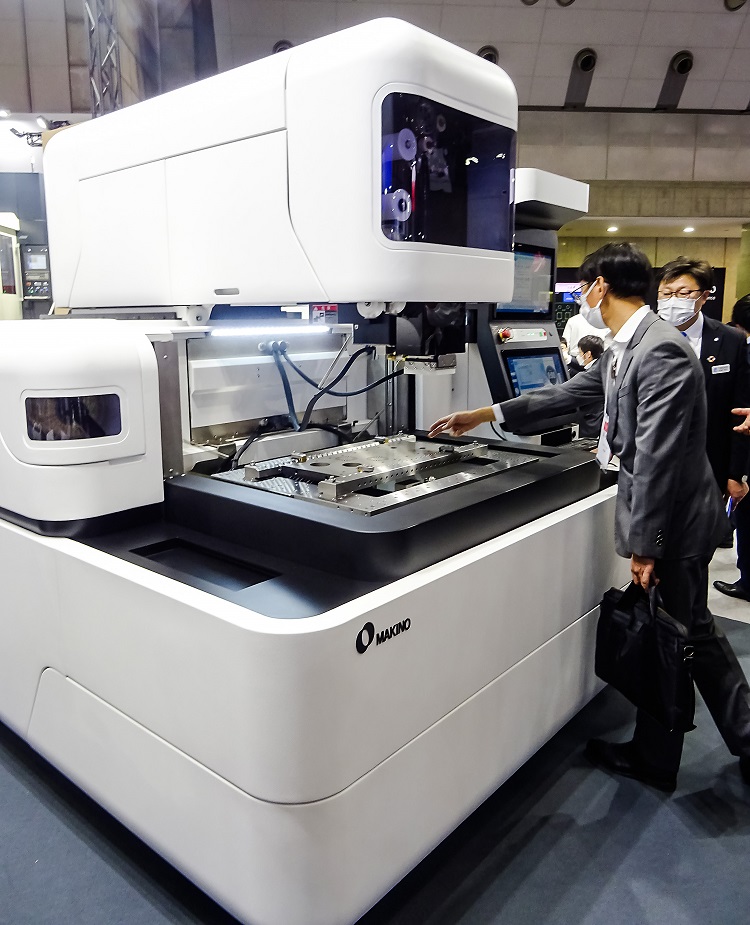 AMADA has released new NC equipment to meet social and environmental issues. The newly introduced bending machines, “EGB-1303ATCe” and “EGB-6013ARce”, use the new NC system and also change the drive system from a hydraulic hybrid to an electric servo motor. “The new machines will significantly reduce power consumption and running costs,” said the person in charge. 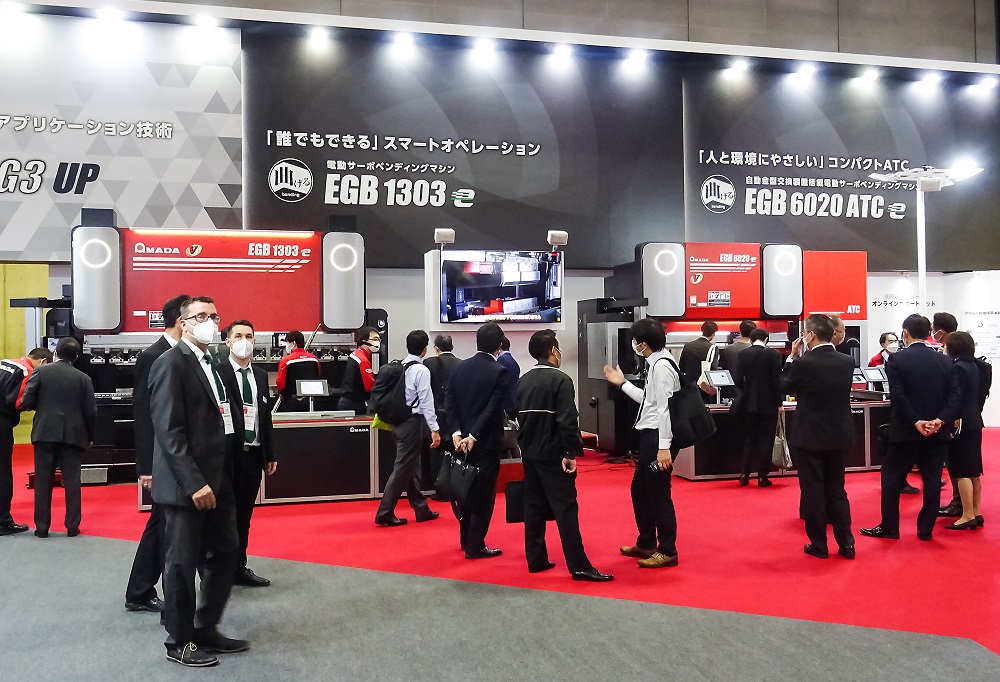 NIDEC MACHINETOOL and NIDEC OKK, both under the group umbrella of NIDEC, promoted the group companies’ comprehensive capabilities. The exhibit took advantage of the strengths of both companies, which have a broad lineup of products ranging from microfabrication machines to grinding centers and double-column MCs. 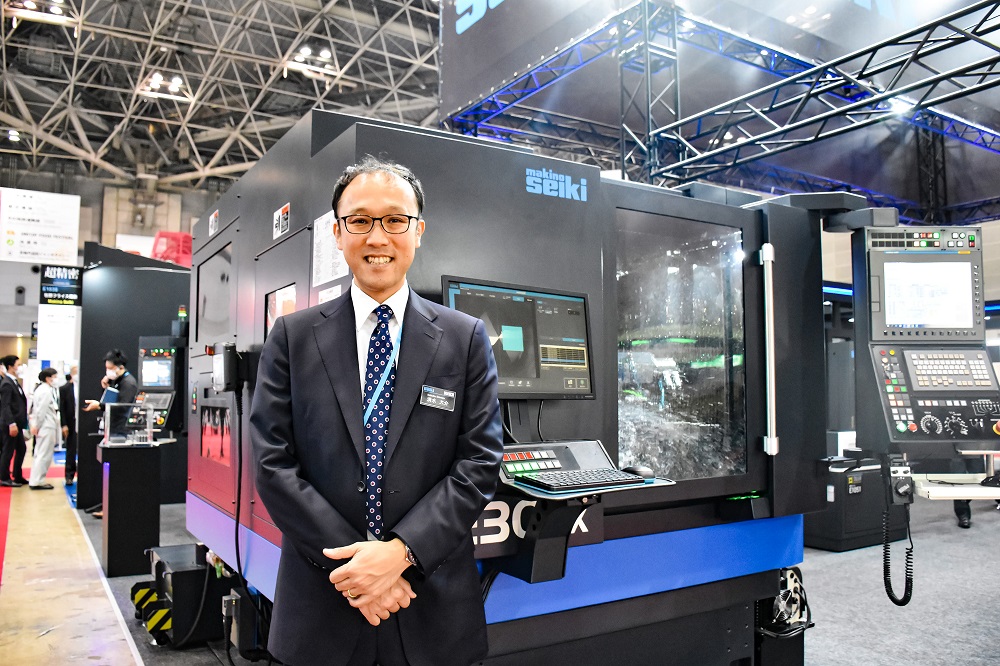 Peripheral equipment manufacturers also promoted their new products and businesses. ALPS TOOL presented its new “CELSUS Series” brand of bar feeders. DAIKIN INDUSTRIES presented a reference exhibit of a diagnostic unit that uses sensors to check the degradation level of hydraulic fluid. By measuring the degree of oil degradation numerically with a color sensor, this system can standardize the replacement of hydraulic oil. NIKKEN KOSAKUSHO WORKS exhibited two types of circular tables, one focusing on accuracy and the other on speed, and proposed solutions to meet customer needs.

SUGINO MACHINE has concluded an OEM (Original Equipment Manufacturer) agreement with CENIT, a German simulation software manufacturer, and held a signing ceremony at its booth on the 9th during JIMTOF. The company will reinforce its consulting services for automation proposals in the future.

The measuring machine manufacturers were the ones that especially caught the attention of the visitors with their variety of proposals.

TOKYO SEIMITSU, also known as ACCRETECH, exhibited several measuring machines specialized for specific workpieces, and appealed for improved productivity. One of these was “XYZAX Opt-BLISK,” a coordinate measuring machine (CMM) that measures “blisk,” a component of aircraft engines.

Mitutoyo exhibited a packaged product that combined a collaborative robot with a micrometer and/or vernier caliper. The company also displayed a system that uses its “TAGLENS” on an industrial robot to detect scratches and dents on workpieces through image data analysis. 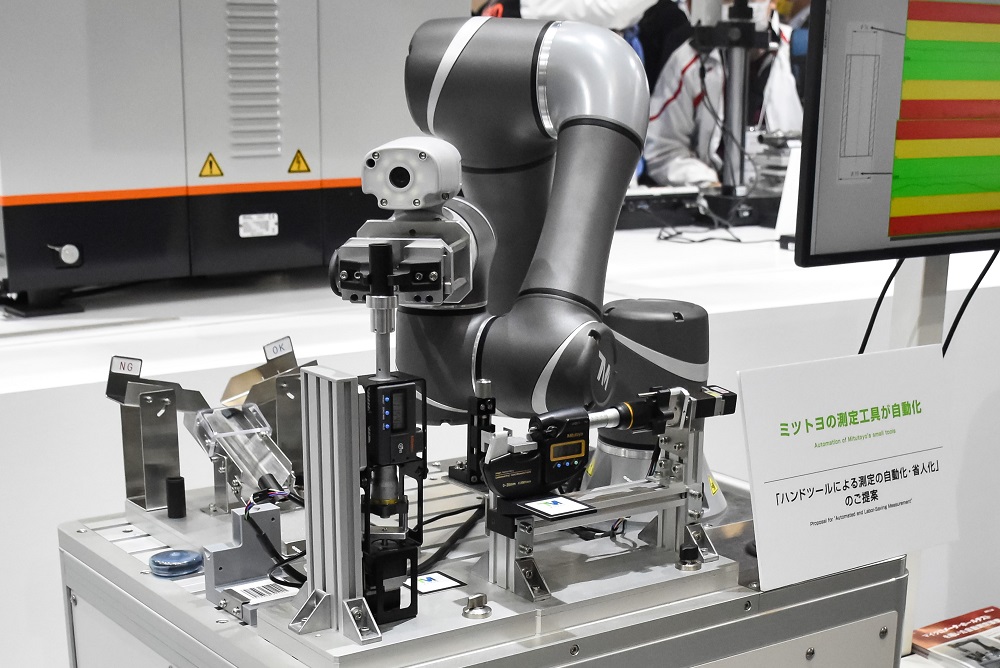 Mitutoyo introduced a package that combines a collaborative robot with a measuring machine.

NGK SPARK PLUG exhibited its “FSW” tool for FSW. This tool is capable of joining dissimilar materials such as aluminum alloys or other light metals and iron-based metals. The person in charge said, “FSW is expected to be in demand in the EV field and other areas in the future”.

Kyocera exhibited tools for microfabrication and also set up a virtual exhibit experience corner using head-mounted displays. Visitors were able to take a closer look at Kyocera’s exhibits in the virtual space even after the show was closed.