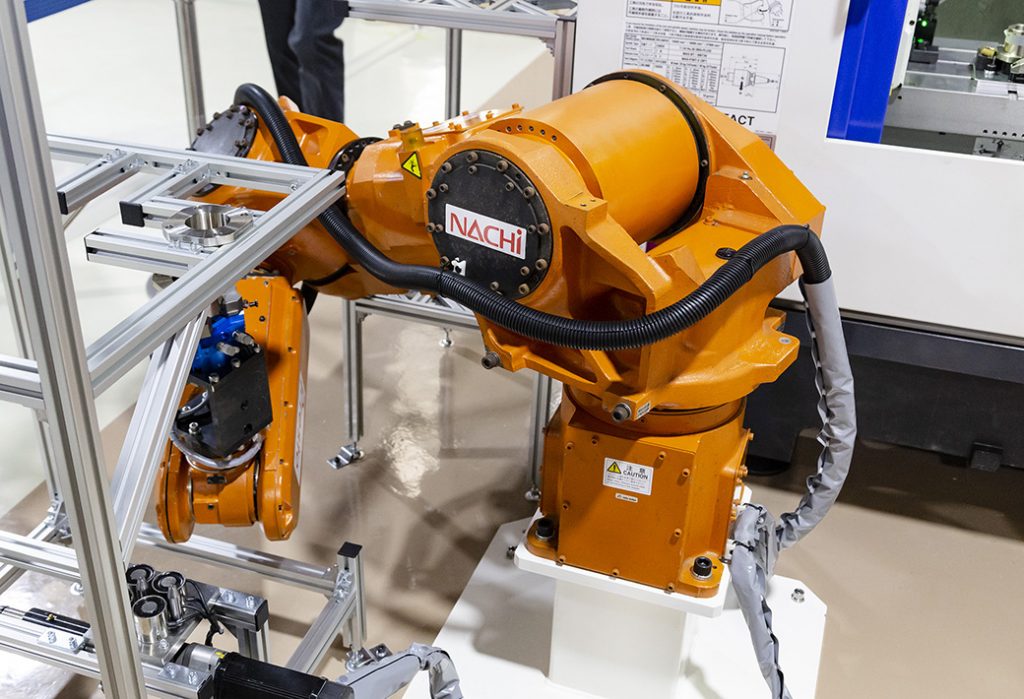 Appealing the Advantages of the Seven-Axis Robot
Miyawaki Machinery, which sells machine tool and industrial robots, exhibited seven-axis robots at private shows held on August 2 and 3, 2018.
Multi-axis robots generally have six axes, and few manufacturers line up seven axes.
Seven-axis robots reach angles that do not reach six axes, and are highly flexible in designing floor space and lines.
President Atsushi Okamoto says, “I would like to emphasize this as one of the suggestions to customers.”

Miyawaki Machinery focuses on selling systems for machine tool and industrial robots.  The company has specialized technical departments within the company and is also registered as a system integrator with Japan Robot Associations.

The company opened a robot showroom on the first floor of its headquarters and held private shows on August 2 and 3.  More than 400 people came in two days.
“According to pre-registration, more than 95% of visitors are users,” said Mr. Okamoto. “In addition, there are many companies which come here with different departments and positions, and it seems that they have a high interest.”
At the exhibition, five robots were displayed, including the seven-axis robots of Yaskawa Electric and Nachi-Fujikoshi, the two double-arm robots “duAro” of Kawasaki Heavy Industries, and the six-axis robots equipped with image-recognition systems.  All of the displayed robots were equipped with a system assuming operation in the processing and inspection processes.  NACHI-FUJIKOSHI’s seven-axis robots and some machine tool exhibited only this private show.  Seven-axis robots attract visitors’ attention