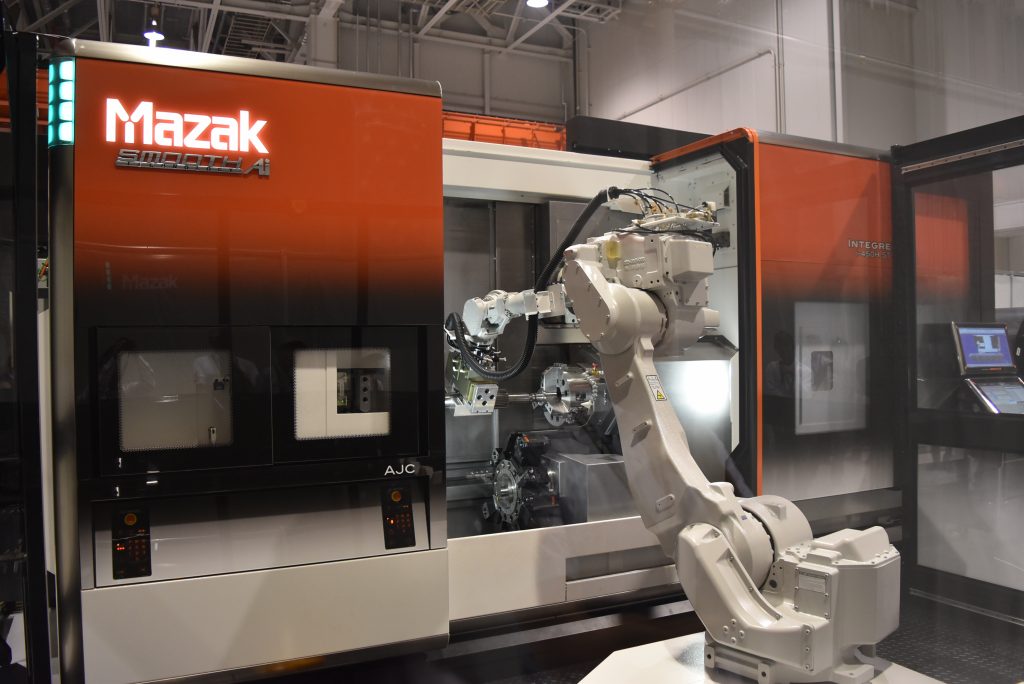 To support automation with hardware and software

Yamazaki Mazak unveiled the multi-tasking machine INTEGREX i-H Series as a new model at EMO Hannover 2019. The feature is that the front of the machine is flat to make it easy to build an automation system. The machine is also equipped with a newly developed NC unit that has a function to make robot teaching more efficiently. The company supports automation from both hardware and software perspectives and responds to growing automation needs.

The reason for making the front of the machine flat

The main feature of the i-H series is to adopt machine design that meets automation needs. The front of the machine was designed to be flat to make building automation system easy. Satoshi Okada, Managing officer and officer of engineering headquarters, said, “we adopt machine structure that is easy to use both as an automation system and as a stand-alone machine.” Yamazaki Mazak currently prepare 2 models according to the workpiece size and showcased both models at EMO Hannover 2019.

The i-H series incorporates innovations to meet automation needs not only in hardware but also in software. The newly developed NC device “MAZATROL Smooth Ai” was installed. The remarkable feature of Smooth Ai is Robot Setup Assist, a new function that makes robot teaching operation more efficiently. It is possible to operate robot teaching by interactively inputting the minimum information such as the shape of the workpiece and the width to be grasped by the robot.

The coordinate system between the machine tool and the robot is linked. Therefore, the operator can command the robot through the NC screen. The Smooth Ai also includes three functions to increase productivity using artificial intelligence, such as SOLID MAZATROL that automatically make machining programs from three-dimensional CAD-data.

There is an increasing need for automation using robots due to labor shortage at the machining sites. “It is difficult to introduce automation systems for the users. There are not enough operators who can handle machine tool and robot, because the both operations are different”, said Mr. Okada.

The i-H series is considered one of the solutions to this problem. This product supports the users who tries to introduce automation from both hardware and software perspectives, and meets the growing need for automation. Yamazaki Mazak aims to sell 100 units per month including 2 models.