87 percent of respondents feel the benefits of introducing industrial robot in Japan: the reader survey of robot digest (2/2) 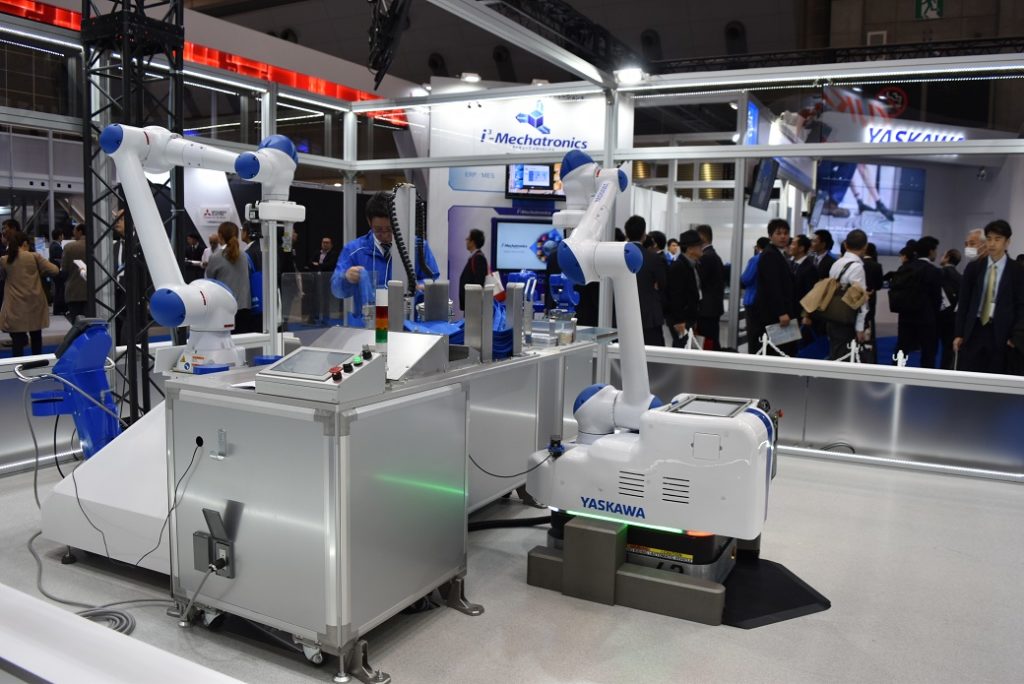 robot digest conducted the reader survey in Japan to investigate the introduction status of industrial robots and how impression do readers have for industrial robots. It is generally said large manufacturers introduce industrial robots more than SMEs, but how is it really? How many people feel effective in introducing industrial robots, and what are the specific advantages? The survey results are disclosed below.

robot digest is a web magazine which established on November 2018 and offers the articles related to industrial robots in Japan. robot digest runs by News Digest Publishing, which also operates SEISANZAI Japan. robot digest delivers useful information such as new product, introduction examples of robot users, researchers and system integrator for those who are interested in introducing industrial robots and engaged in the robot industry under the motto “supporting robotization and automation at manufacturing site”.

33% of respondents feel the disadvantages of introducing industrial robots 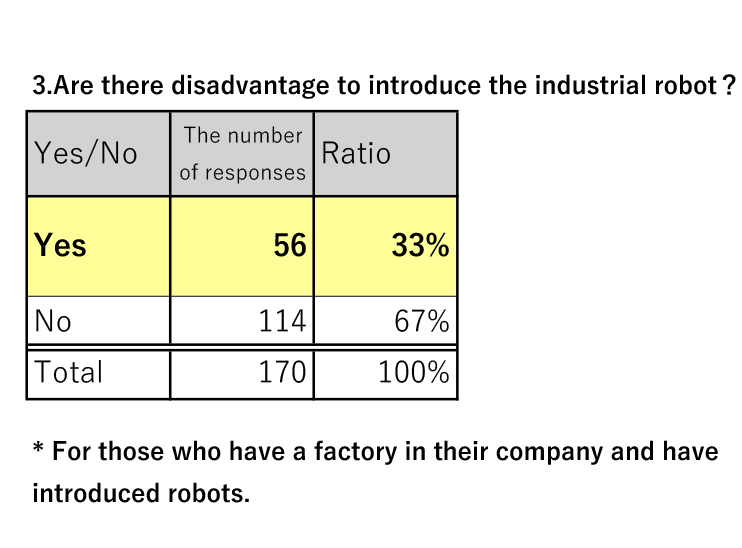 Especially, the respondents who belong to SMEs said that “it takes a lot time for maintenance” and “it is difficult to change the production process”.

The followings are the main opinions:

・ There are barriers to troubleshooting and handling. (male in his 40s, over 1000 employees, metalworking industry)

・ It is necessary to improve jigs and tools until the expected accuracy is achieved. (male in his 60s, 101-300 employees, non-metalworking industry)

・The robot school is crowded and I can’t attend the class. (male in his 40s, 301-500 employees, metalworking industry)

・ The cost of introducing the system was too high. (male in his 50s, more than 1000 employees, metalworking industry)

・ A failure occurs suddenly because maintenance management has not been completed. (male in his 50s, 21-50 employees, metalworking industry)

・ Robot engineers cannot be brought up with the introduction of only one unit, so the process cannot be changed flexibly. We have to ask a system integrator. (male in his 40s, under 20 employees, metalworking industry)

The barriers to introduction are “internal specialist” and “cost”

robot digest asked all respondents about the barriers of introducing industrial robots. The survey was conducted by selecting 1-5. If the average is high, the question item tends to be more suitable. The item with the highest average is “there are no specialists in the company”. The following is “introduction cost and running cost is expensive” and “I don’t know how much it costs” (Table 4). On the other hand, items with low average ​​are “I don’t know what robots can do” or “I don’t know where to buy or consult.” It can be inferred that there is a big difference from general consciousness because the respondents are highly interested in industrial robots. 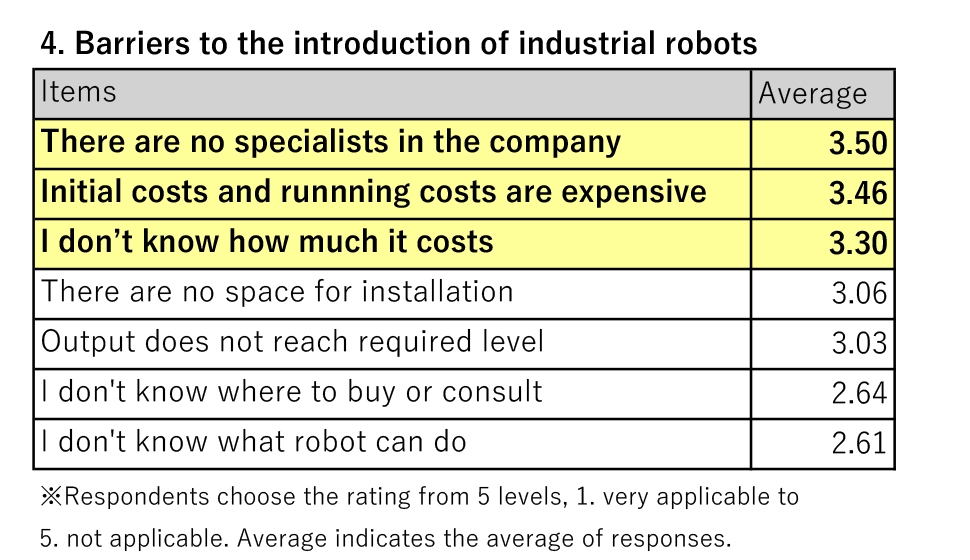 There are some works that people want make robot do, and they can find out where to buy and consult. However, since there is no human resource who is good at handling the robot in the company, the cost is too high, or they are not sure how much it costs, it does not tend to lead to the introduction of robots.

Respondents are interested in production efficiency and future growth

robot digest asked why respondents are interested in industrial robots (Table 5). The items with the high average were “I expect production efficiency increase” and “industrial robots are expected to grow in the future”. However, these two have different trends. The group which already installed robot had high average for “I expect production efficiency increase” with 4.25.

On the other hand, the average of “industrial robots are expected to grow in the future” was high in the group which belong to sales, management, general affairs and planning department with the average 4.23.

robot digest researched what kind of industrial robot tips people wanted to get. “Technology and seeds that will be put to practical use in the future”, “new products and technical tips”, and “Introduction examples at other companies”, which show trends in the robot industry, were ranked high (Table 6) 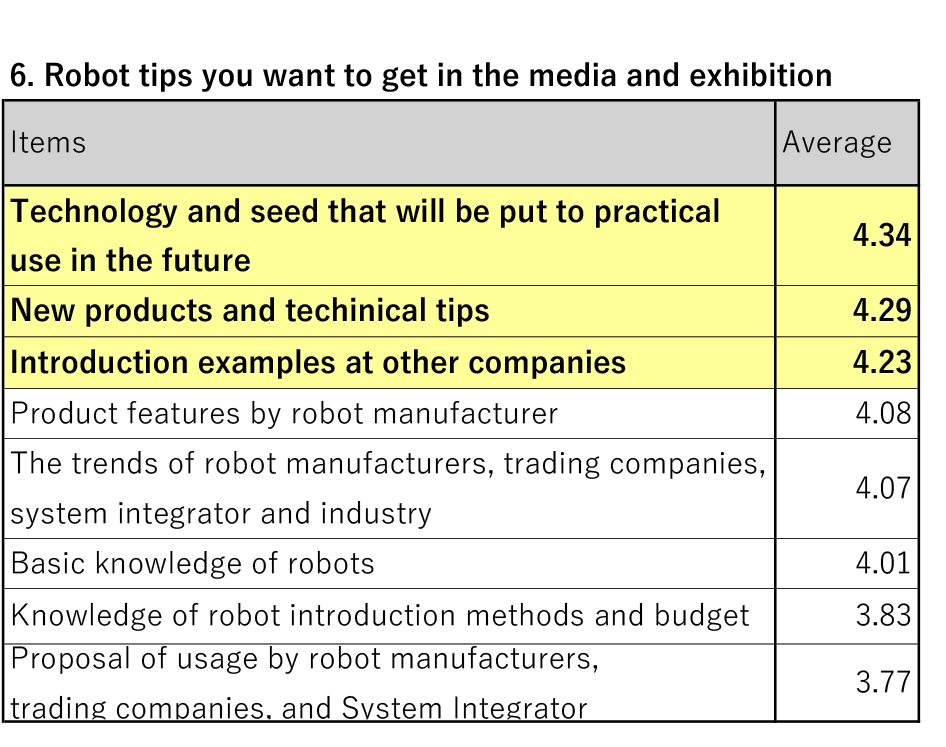 In the same way, two groups (the first group which already installed robot and the second one which belongs to sales, management, general affairs and planning department) were extracted.

The average of “introduction examples at other companies” in the first group was 4.35.

The second group is 4.55 for “technology and seeds that will be put into practical use in the future” and 4.41 for “new products and technical tips”. It is also interesting that only second group is prominent with an average of 4.40 in “the trends of robot manufacturers, trading companies, system integrator and industry”.

The demand for Robot exhibition in Aichi is high

In this survey, robot digest asked people if they are interested in taking part in RTJ. In order to verify the willingness to visit RTJ, robot digest compared the attending experience of the robot trade show “INTERNATIONAL ROBOT EXHIBITION 2017 (iREX2017)” held in Tokyo with the willingness to attend RTJ. 23% of the respondents all over Japan answered “I went” (Table 1) and 21% (Table 2) in the Tokai region. Even though robot digest readers who considered to be interested in industrial robots, the percentage of people who visited the largest exhibition in Japan is low (* There is almost no regional bias in the work place of readers who answered “I went”. The ratio of Kanto region was slightly high.).

Responses of “I will go / under consideration” are extremely high with 86% nationwide (Table 1) and 90% in Tokai region (Table 2). 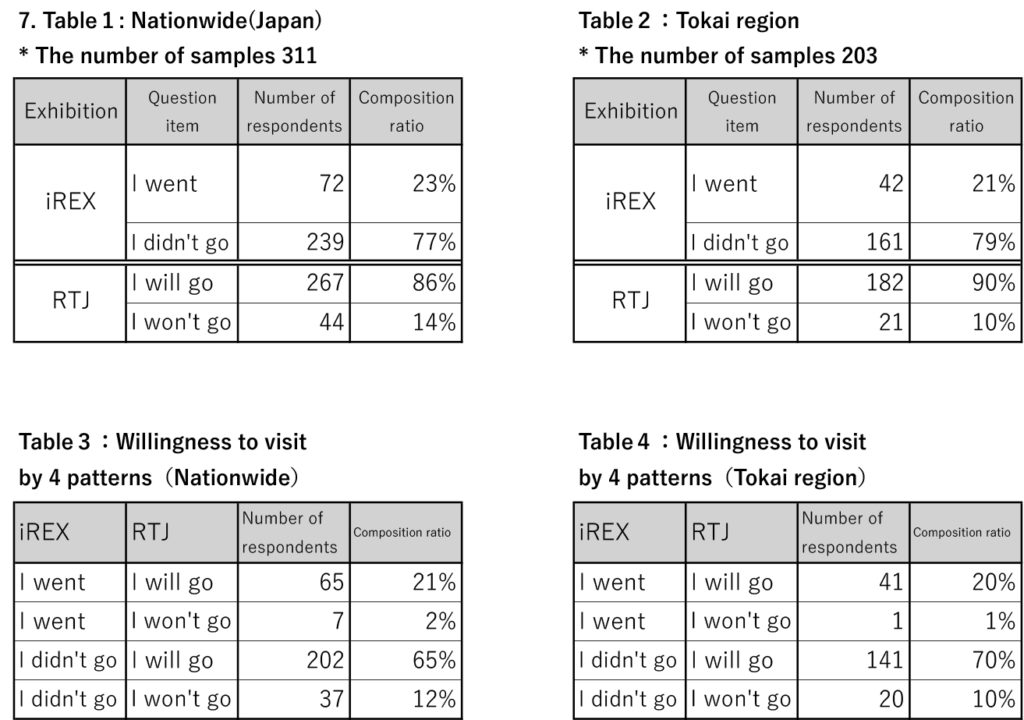 From the above survey results, the following is considered. robot digest readers are very interested in industrial robots but could not participate in iREX. In the Tokai region, the percentage of respondents who answered “I didn’t go to iREX but will go to RTJ/ under consideration” is overwhelmingly high at 70% (Table 4). The total number of “I will go to RTJ / under consideration” is 90%. It can be said that the potential demand for the industrial robot exhibition in Aichi is extremely high.

▶87 percent of respondents feel the benefits of introducing industrial robot in Japan: the reader survey of robot digest (1/2)

87 percent of respondents feel the benefits of introducing industrial robot in Japan: the reader survey of robot digest (2/2)