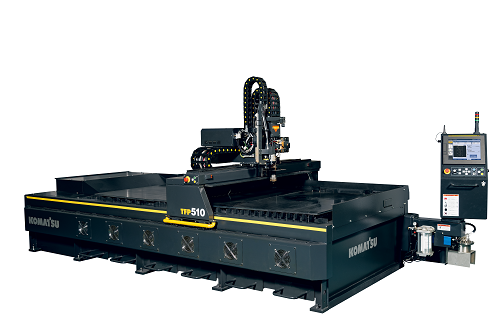 Komatsu Industries launched the plasma cutting machine TWISTER “TFP510-3” for medium and thick plates. A full model change was made with the concept of “High productivity”, “Easy set-up operation” “User friendly”. The power supply capacity has been increased from the conventional 150A to 200A, and the cutting speed has been greatly improved from the conventional 1800mm per minute to 2200mm for a plate thickness of 19mm.

“TFP510-3” adopts a cartridge system that integrate the electrode and the nozzle. The setup time was shortened by eliminating the assembly time for consumables, which used to take 5 minutes, and cutting error caused by miss assemble of consumable parts was eliminated.

The interface and operability were also renewed. Even unmatured operators can handle the machine through the screen as if they were using a smartphone.