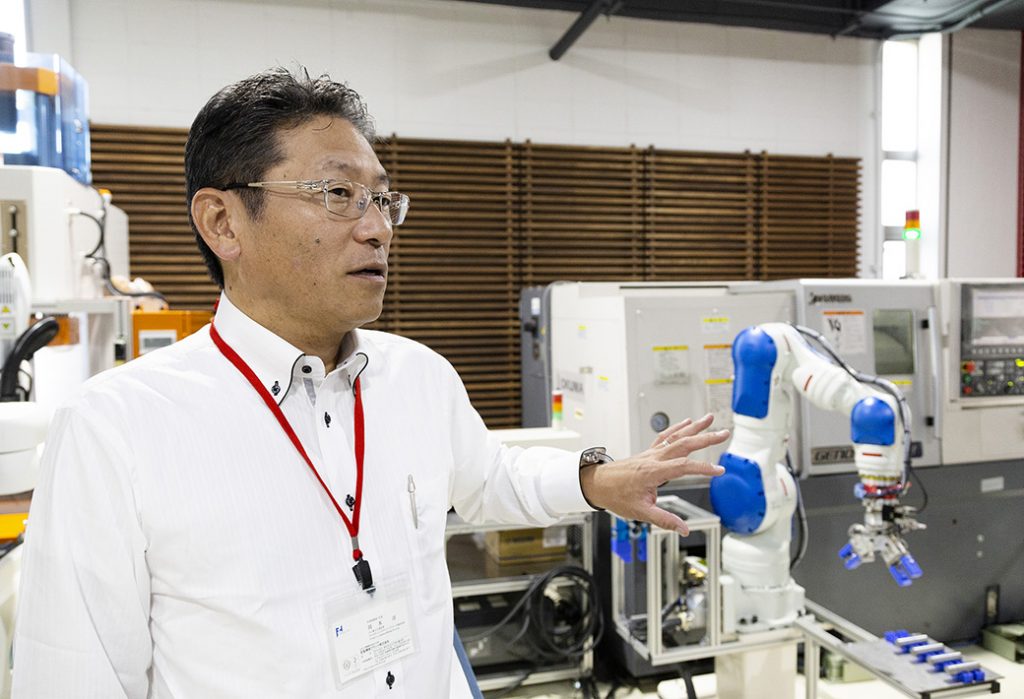 Appealing the Advantages of the Seven-Axis Robot

Miyawaki Machinery, which sells machine tool and industrial robots, exhibited seven-axis robots at private shows held on August 2 and 3, 2018.
Multi-axis robots generally have six axes, and few manufacturers line up seven axes.
Seven-axis robots reach angles that do not reach six axes, and are highly flexible in designing floor space and lines.  President Atsushi Okamoto says, “I would like to emphasize this as one of the suggestions to customers.”

Two 7-axis robots attracted special attention from visitors.
Yaskawa Electric’s seven-axis robot was combined with OKUMA’s NC lathe and Nachi-Fujikoshi’s seven-axis robot with Brother’s machining center, demonstrating the opening and closing of doors, loading and unloading of workpieces, etc.
About the exhibition concept, Mr. Okamoto said, “When listening to the robotic exhibition, many people imaged the demonstration of transporting the work by high speed. However, we wanted our customers to see how the work was used in the metalworking field concretely.”

The exhibition of the private show was a configuration that made it possible for visitors to see that the angle reaches even an angle that cannot be reached with a 6-axis robot, taking advantage of the advantages of 7-axis robots.  The seven-axis robot has one more rotation axis of the upper arm than the six-axis robot.
Thus, with a joint twisting the upper arm, it is possible to move the upper arm and then tilt the forearm so as to lie down.  As a result, the hand is extended so as to surround the obstacle, and the hand reaches between the shelves at a low position.
Mr. Okamoto said, “It is important us to have a line-up of seven-axis robots as a proposal for automation and labor saving. We will work to expand sales of systems using various robots in the future.”