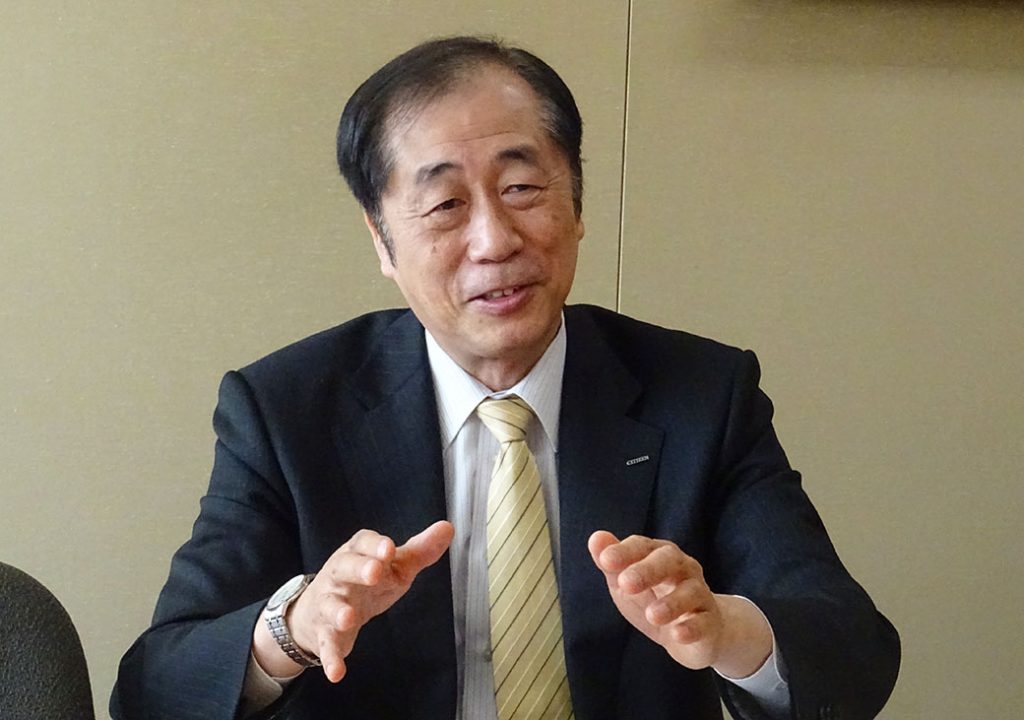 To provide optimal services for each foreign market

Keiichi Nakajima, president of Citizen Machinery, says, “The current situation regarding orders is not bad.”  Nakajima immediately replied “India” when he was asked about a promising market in the future.  He says he feels the energy of this developing market and the performance of Citizen Machinery in the Indian market is growing.  Citizen Machinery has established an optimal service support system for each market, including the provision of processing technologies.  The company is also expanding its base in the United Kingdom, which has been shaken by its departure from the European Union.

―― Orders are declining across the machine tool industries.

The number of orders received by the Japan Machine Tool Builders’ Association (JMTBA) at the end of the last fiscal year (April 2018 to March 2019) decreased by 30% from the previous fiscal year.  However, Citizen Machinery’s decline has only been about 15%.  We must also bear in mind that we have to prepare for the recoil reduction of global market since 2018 saw the highest number of orders received in the history of the JMTBA. However, Citizen Machinery has been able to maintain a good balance in business performance so far in the five major markets of Japan, Europe, the Americas, Asia, and China.  For this reason, we have a sense of reassurance that we can compensate for any decline in business performance.  Currently, each of the five markets is performing well, and there is no sense that the market has fallen significantly.

―― Please tell us about the trends in each industry.

Approximately half of all sales are for automotive, which worldwide are stable in the medium-to long-term.  The market for construction machinery, which had stabilized up until recently, has been revitalizing, and the medical equipment industry, which Citizen Machinery specializes in, has been strong.  In addition, the market for electrical precision equipment and housing equipment is growing.  There is no sign that the semiconductor-related markets will move well, but there will be a dramatic move toward the widespread use of fifth-generation communications (5G).  Social structures will change dramatically in a world where 5G becomes prevalent.  New industrial structures and new processing needs will emerge.  What is important is to determine what the industry is and how we respond to it.

―― Please explain each regional market in detail. First, how is the Chinese market?

Export-type industries such as automobiles are greatly affected by trade friction between the United States and China.  However, in the medical equipment sector and other industries oriented for domestic demand, the desire to invest has not declined.  While business confidence differs from industry to industry and from customer to customer, China’s large total domestic demand has enabled it to maintain a high level of sales.  I have the impression that the market grew too much in 2017 and 2018.

―― Where do you think the market for future growth lies?

India.  The market for sliding headstock type CNC automatic lathes, our flagship product, is not large yet, but our sales more than doubled year-on-year.  Thus, the company’s internal award was granted for its market development team in India.  The market for automobiles and motorcycles is particularly good.  Although the market for medical devices has not yet taken off, India has a huge population of 1.2 billion people.  We say “don’t delay” when it comes to markets where growth is expected.

―― You have high expectations.

In January, I visited India. It is a very vibrant country with a large population.  We expect long-term growth in the demand for machine tools in various fields, including automobiles, construction machinery, and medical equipment.  In 2014, we opened a Technical Center in Bengaluru and opened a new office in New Delhi in March 2019.  In the future, we will enhance our service-support system by increasing the number of types of machine tools installed at our business bases.