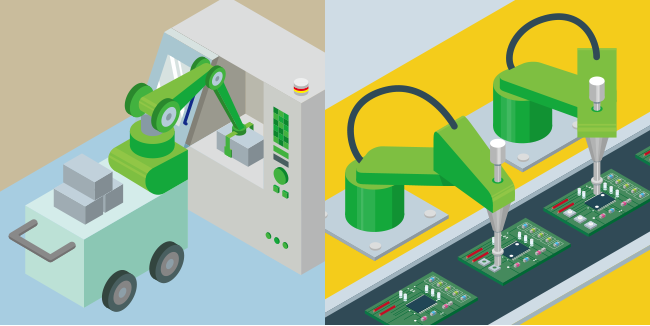 1. What is an industrial robot?

4. What are end effectors?

Industrial robots are used in a wide variety of fields, such as parts processing plants and electronic circuit board assembly plants.

・ Arm-type robots work in place of humans at manufacturing sites.

・ Industrial robots are versatile and can be used for various purposes, changing the unit at the end of the arm.

・ Highly safe collaborative robots that can operate together with humans are now available.

1. What is an industrial robot? 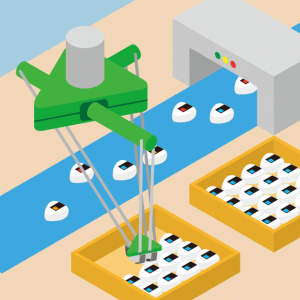 A robot is a machine that performs some tasks in place of a human.

The definition of a robot varies. For example, the Ministry of Economy, Trade and Industry (METI) of Japan defines a robot as “an intelligent mechanical system with three elemental technologies: sensors, controllers and actuators “.

On the other hand, robots that are not classified as industrial robots, such as cleaning robots or catering robots in restaurants, are called service robots. However, the technical boundary between the two classifications has become blurred over the years.

The automobile industry and the electrical and electronics industry have introduced many industrial robots. Against the background of a serious labor shortage in advanced countries and growing countries, industrial robots are attracting attention in all industries these days.

There are various types of industrial robots. The four most common types are articulated robot, SCARA robot, delta robot, and cartesian coordinate robot. 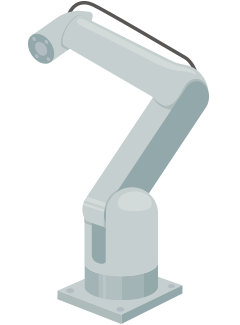 This is the type of robot most people first think of when they say “industrial robot”. Articulated robots are implemented for welding and painting, which account for a large percentage of robot applications. They are highly versatile and are used in a variety of sites, such as logistics warehouses and parts processing plants.

Unlike articulated robots, which can grasp parts at an angle or from the side, SCARAs can only work from directly above, but they are both horizontally flexible and vertically rigid. This type of robot is therefore suited to assembly tasks such as pushing parts into place, and for transporting small parts.

The name SCARA is an acronym for “Selective Compliance Assembly Robot Arm”. 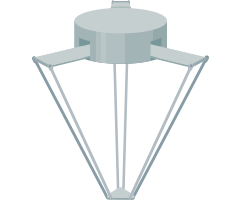 Delta robots (parallel arm robots) are a type of robot in which two sets of three or four pairs of arms support a single tip. A suction unit or other device is attached to the end of the arm to suck and transport the workpiece.

The arms of the delta robots are thin and lightweight, but they are rigid enough to enable very quick movements. This type of robot is mounted on a conveyor belt, for example, to pick up and transport flowing products at high speed. 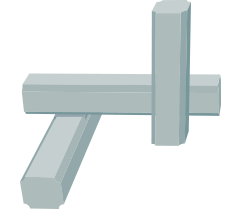 artesian coordinate robots consist of linear axes combined at right angles. This type of robot is used with a single-axis motion unit consisting of a linear guideway and a ball screw. Some products allow the number of axes to be increased depending on the application such as 1-axis (single axis), 2-axis, 3-axis, 4-axis, and 6-axis. Cartesian coordinate robots are the simplest and least expensive, although they are not suitable for complex operations because it consists of only linear axes.

There is also a double-arm robot with two arms attached to a single base. Double-arm robots can perform movements that cannot be done with a single arm, such as holding a box with both hands, and can easily replace human tasks as they are.

A new type of industrial robot has emerged that can work in the same space as humans without safety barriers. This is the collaborative robot (Cobot). Users can use cobots without safety fences if they conduct appropriate risk assessments.

In recent years, many of robot manufacturers entered the cobot market. Cobots have high safety features, for example, they are equipped with a function that automatically stops the robot immediately upon contact with a person. Since this type of robot has no safety fence, the footprint of the robot system can be significantly reduced. However, to ensure safety, cobots cannot move very fast.

Teaching is done while the operator actually moves the robot using a hand-held control panel called a teach pendant, which is used to operate and program the robot. The robot engineers are required to have considerable know-how for teaching process.

4. What are end effectors?

Industrial robots can perform a variety of tasks such as welding, painting, conveyance, and assembly because they can freely change the unit attached to the end of the arm. These units are called “end effectors”.

Grippers are one of the end effectors, used to grab objects. There are two types of grippers: one that opens and closes with the jaws moving in parallel, and the other that opens and closes at a fulcrum by changing the angle of the jaws to grip objects. Grippers are used for a variety of applications, such as transport, assembly, and loading workpieces onto machine tools.

Vacuum grippers are the end effectors consisting of a vacuum generator and suction pads to suck and convey workpieces. They are not suitable for transferring metal parts, but are ideal for loading and unloading cardboard boxes and transporting small, lightweight parts.

There are also various other end effectors such as welding torches, spray guns, and dispensers. 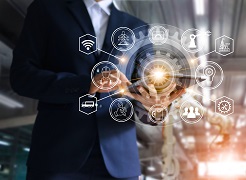 In addition to the purchase and production costs of various peripheral equipment, the introduction of a robot system also involves system integration costs. The total cost of a robot system is therefore generally many times higher than the price of the robot itself.

THK launches robo-hand to grip workpieces regardless of shape