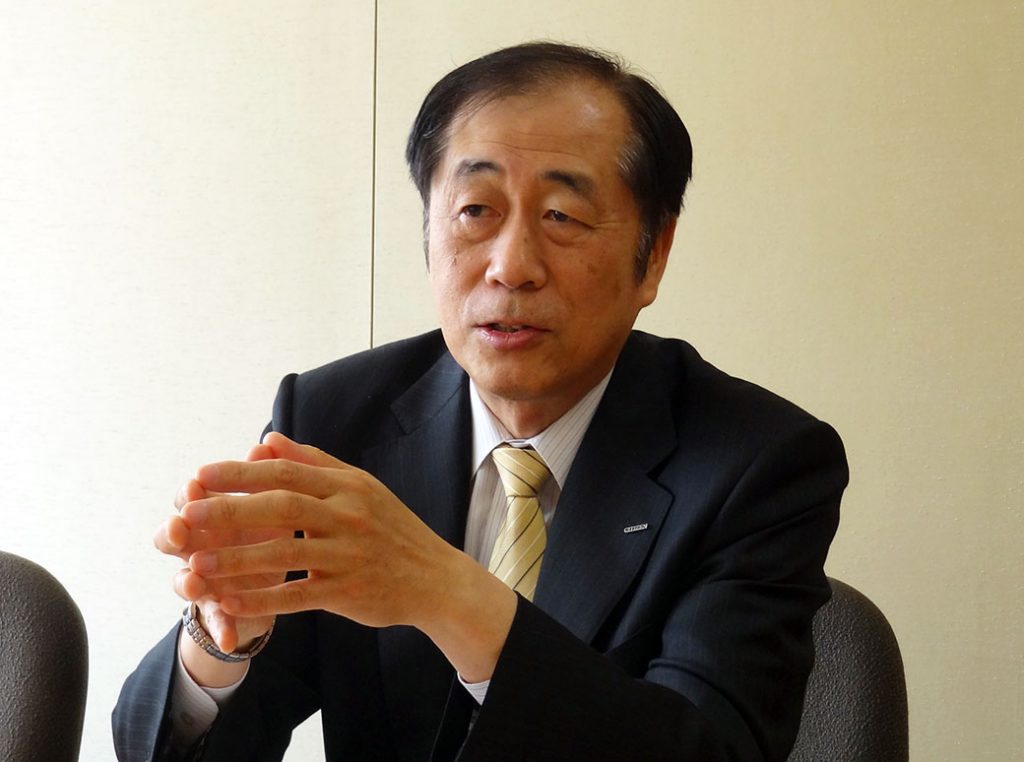 To provide optimal services for each foreign market

Keiichi Nakajima, president of Citizen Machinery, says, “The current situation regarding orders is not bad.”  Nakajima immediately replied “India” when he was asked about a promising market in the future.  He says he feels the energy of this developing market and the performance of Citizen Machinery in the Indian market is growing.  Citizen Machinery has established an optimal service support system for each market, including the provision of processing technologies.  The company is also expanding its base in the United Kingdom, which has been shaken by its departure from the European Union.

―― What is your strategy for the Indian market?

As countries develop, people living there want better lives and need better tools.  We will increase the number of service personnel and engineers and provide higher processing skills so that we can cover all of India at two technical centers.  Technologies and skills are necessary to make full use of high-performance machine tools.  Conversely, there are processes that can be realized only by using high-performance machines.  Based on this philosophy, we are strengthening our local engineering support capabilities.  Our business base in Thailand serves as a training base, and we have established a support system for services and processing technologies.

―― In emerging markets such as India and China, there must be some reasons for you to have high expectations.

The Chinese population is 1.4 billion, and as I mentioned earlier, domestic demand alone has been quite strong.  Gross domestic product is expected to grow by 6%.  I think the economy has bottomed out, despite a slowdown in the market recently.  In particular, there is a strong need for automation and machine upgrades.  On the other hand, the markets of Southeast Asian countries are weak, but not all are declining.  Some customers are active in strong industries and capital expenditure.  How to catch those customers is important.

―― Citizen Machinery has a unique strategy in Europe.

Today, Europe is by no means strong, but in 2018 it was almost too strong.  We have major bases in four countries: the United Kingdom, France, Germany and Italy.  In the past, all the presidents of these four bases were Japanese nationals dispatched from Japan, but now local human resources are employed and, of these four bases, only one president is a Japanese national. Other presidents are locals with engineering backgrounds.  Four companies frequently hold meetings and cooperate with each other to appropriately respond to the market.

―― I was amazed at your investments in the United Kingdom.

The United Kingdom is being shaken by the issue of leaving the EU.  Our British corporation has a long history, and this summer we will expand our office in Birmingham as a sales base with showrooms.  The opening was delayed as environmental arrangements took a long time, but this investment was the realization of what had been decided two years ago.  However, since this is an investment that has been shaken by the issue of leaving the EU, it has received a lot of attention from the public, and has been very welcomed by local governments.

―― Please tell us if you have a country-specific sales strategy.

The slogan “Let’s sell high-end machines in high price” is shared with overseas dealers.  For example, LFV (low frequency vibration cutting) technologies, which can cut chips finely, are very popular in Japan and overseas as options for machine tools.  Our strength is the three-way integration of machine tools, special technologies such as LFVs, and IoT technologies.  While there is a difference in needs between developed and emerging markets, it is important to provide the necessary service support for those markets at that time in the best way, and we have established a system to achieve this.

―― LFV can become a strategic product not only in advanced markets but also in emerging markets.

In addition to Japan, Europe and North America, we will focus on promoting LFV technology in China and other emerging countries.  In the future, we will not be able to sell just machines simply, that is, we will be in an era in which we need special technical supports with machines such as LFV.  The LFV enables nighttime operation, and customers who have used the LFV once say, “It’s expensive, but it functions very well.”  In emerging markets as well, we believe that these technologies will become increasingly popular in the future.

The great power politics exert influences on the global economy in these a couple of years.  The influences are getting higher and higher.  This situation seems like the Cold War by 1980’s but there are the huge differences between these two periods; today, people are informed, fulfilled and enlightened globally with the cutting-edge technologies.  None of the governments can stop this movements, or they run up large social debts.