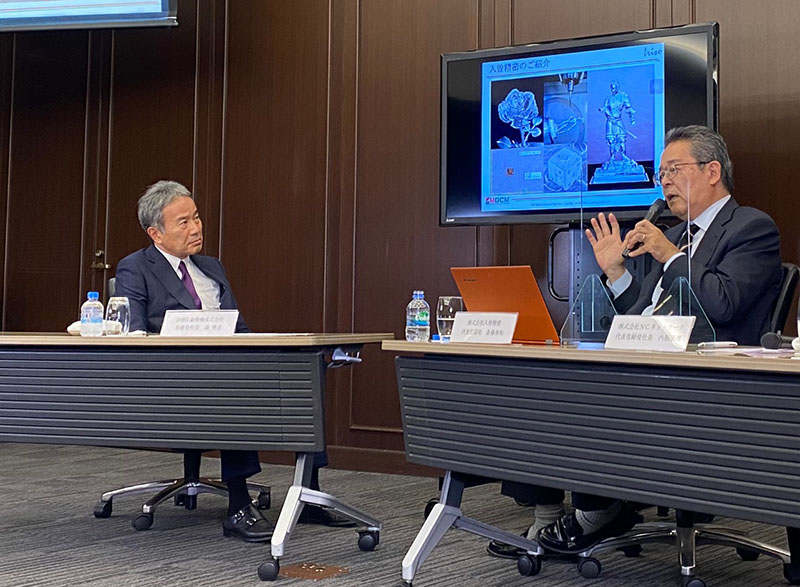 Dr. Masahiko Mori, president of DMG MORI and president Kiyokazu Saito of Iriso Seimitsu, talked at the annual meeting of the Micro Manufacturing Association on November 20th, 2020. DMG MORI is a leading machine tool builder in the world, and Iriso Seimitsu is a part manufacturer, which is famous for microfabrication and precision machining.

The theme is “Manufacturing in 2070”. How do they see changes in machine tools and machining technology over the next 50 years?

First of all, Dr. Mori analyzed the current state of the machine tool industry. The peak sales of DMG MORI was 501.2 billion yen recorded in 2018. “In 2020, about one-third of sales disappeared compared to the previous year and two years ago. Major economic crisis like COVID-19 and the global financial crisis will come every 10 years, so it is important not to be fazed by anything”, said Dr. Mori. The main theme in the medium to long term is environmental measures.

In the future, social infrastructure will change completely, and new products will be developed more and more. Dr. Mori predicted that the manufacturing market would expand in the future.

Machine tool-related technological trends have changed every 10 years so far. NC lathes widely spread in the 1970s. Vertical machining centers (MC) developed in the 1980s, and horizontal MCs developed in the 1990s. In the 2000s, multi-tasking machines became widespread, and in the 2010s, simultaneous 5-axis MC began to spread. Dr. Mori predicts that the total automation will be progressed in the 2020s, including peripheral equipment of machine tools, and in the 2030s, the hybrid of machining technologies will be spread beyond the old classification of machines, including measurement.

Dr. Mori also has a sense of crisis that technological trends of machine tools rely on advanced control by software and programs. Dr. Mori said, “Machine tools must be able to be operated precisely, including workpieces, and tools for machines. There is a business opportunity in the machine tool itself because many people pay more attention to control software. There are not many countries and regions to make a good machine tool in the world.”

The second part of this article will be uploaded on January 18th.