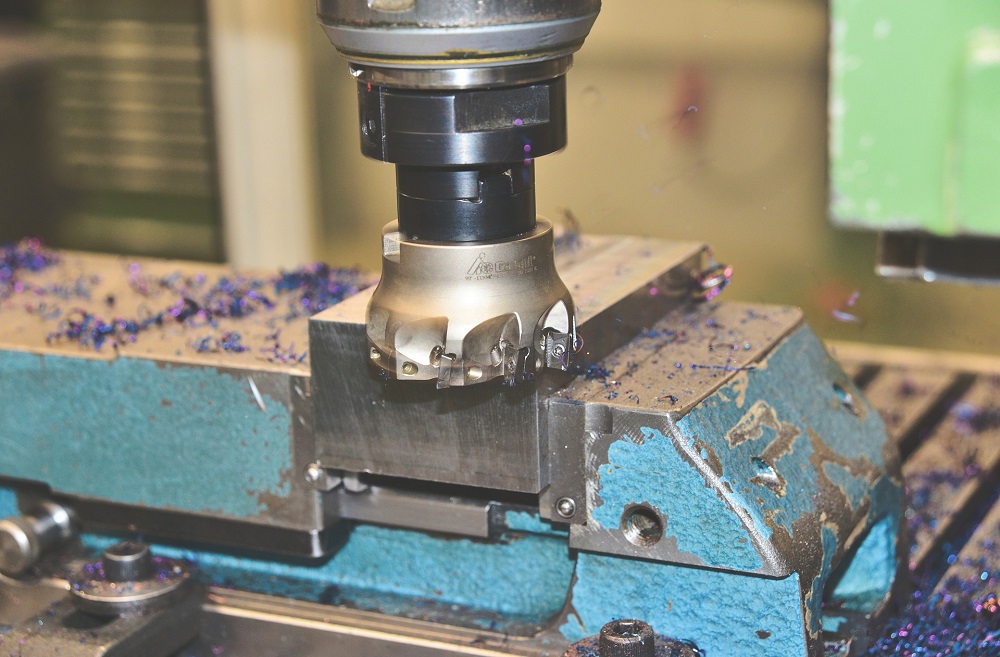 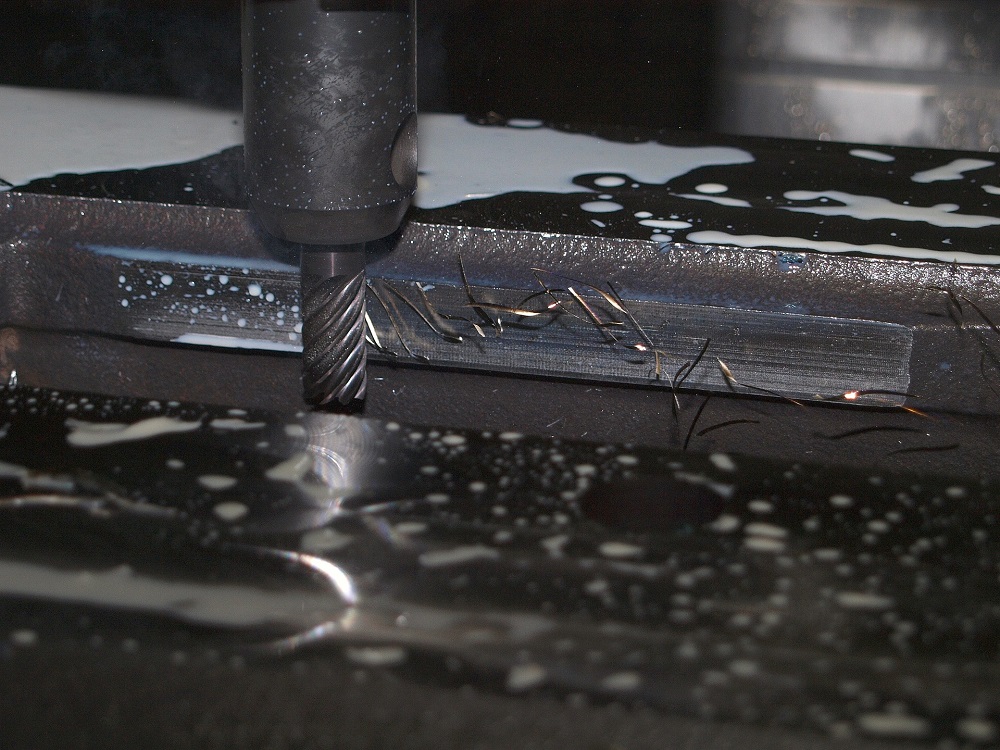 ・ MC is one of the most major cutting-type machine tools.

・ On MC, the tool rotates, but the workpiece (material) does not.

A machining center (MC) is a machine tool that presses a rotating cutting tool against a fixed metal material for shaping the  workpiece. Among cutting-type machine tools, MCs and lathes are recognized as representative models.

Although both MCs and lathes are representative of machine tools, the difference between the two can be easily determined by the machining method.

On lathes, cutting is performed by pushing a rotating workpiece against a tool bit, which is attached to a spindle. This type of machining is called turning. It is mainly used for machining cylindrical workpieces.

On MCs, on the other hand, the tool rotates, but the workpiece does not. A MC uses a rotary tool to cut a fixed workpiece. This is suitable for machining plate- or block-shaped workpieces.

b) Equipping with a numerical control device

a) Using of rotary tools

Rotary tools are cutting tools, such as milling cutters or end mill, that processes a workpiece while rotating the blades. The machining method that uses a rotary tool to cut a flat surface or groove in a workpiece is called milling.

Numerical control refers to the control of cutting tool and table movements, tool changes, and other operations using numerical information. It is also called “NC,” an acronym for numerical control, every MC is equipped with an NC device.

MCs are always equipped with an automatic tool changer (ATC) as well as NC device. The ATC is a device that stores and provides various tools, including milling tools and end mills for milling, drills for drilling and taps for threading, when necessary. Thanks to the ATC, MCs can perform various machining operations such as milling, drilling and threading once the workpiece is set on the table. 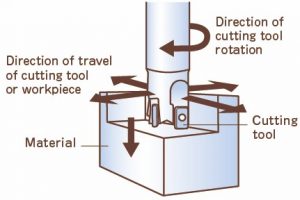 The bed serves as the foundation to supporting the entire system of the MC. It also plays the role of guiding the table to the desired position precisely.

The column is installed vertically on the bed. Some columns can move on the guideways on the bed, or have an integrated structure with the bed.

The ATC is a device that automatically changes cutting tools. It consists of a tool magazine that stores tools and a changer arm that changes tools instead of human hands. Each tool is stored in the tool magazine; the required tool is called up from the tool magazine on command from the NC device.

The NC device is the brain of the MC, and is responsible for commanding the spindle speed and the movement of the table and cutting tools.

Tools are mounted on the spindle via toolholders. There are several standards for toolholders. In Japan, BT shanks are widely used.

BT stands for “Bottle grip Taper” and is widely recognized as a standard that originated in Japan. BT shanks are characterized by a tapered shank where the toolholder is attached to the spindle.

BT shanks are classified as BT30, BT40 or BT50 according to the diameter length of the largest part of the taper. This number also divides MC sizes. Larger numbers mean larger BT shanks and for larger MCs.

MCs are broadly classified into vertical and horizontal types, according to spindle orientation. There are various other types as well, such as Double Column MCs and special purpose MCs for transfer lines. 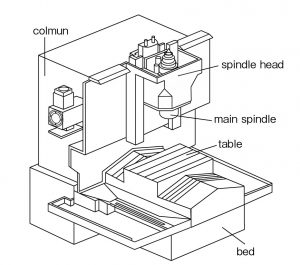 The basic structure of a vertical MC

Vertical machining centers (VMCs) have vertically oriented spindles that approach workpieces mounted on their table from above; they are machine shop staples and mainly used for machining small and medium-sized parts.

VMCs are suitable for machining plate-shaped workpieces with a large machining area per surface, such as molds. Since the workpiece is machined from above, it is easy to compare the drawing of the parts with the actual machining points, providing easier operation and minimizing machining errors. It is also easy to grasp the distance between the cutting edge of the tool and the workpiece. Another advantage of this machine is that it can be installed in a relatively small space. 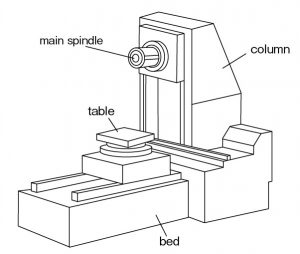 The basic structure of a horizontal MC

Horizontal machining centers (HMCs) are MCs with its spindle in a horizontal orientation; many models are equipped with a rotating table. Automatic pallet changers (APCs) can be added to HMCs for longer operations in the production line.

This machining center design avoids various issues caused by chips generated from machining. One reason for this is that the horizontal orientation encourages chips to fall away, so they don’t have to be cleared from the table. This makes it easy to support long-term unmanned operation and automation using APCs and other devices.

In addition, with an indexing table that rotates around the Y-axis, machining on four surfaces can be performed by mounting the workpiece on the table once, which makes machining highly efficient.

Double Column MCs are MCs with two columns and a cross rail to guide the spindle head in a “gate” configuration, also called a “gantry type machining center”.

Double Column MCs are powerful for machining large workpieces in the aircraft, ship, and heavy electric machinery industries. By attaching a device to the spindle head, a single double-column MC can perform a variety of machining operations, such as slanted holes. By using different attachments, up to five surfaces can be machined, excluding the surface in contact with the table. Double Column MCs of this type are also called “5-face machining centers”. If 5 faces can be machined in a single set-up, the workpiece can be machined accurately and efficiently.